New data from the Framingham Heart Study finds that low LDL-cholesterol is related to the future development of cancer. Scientists studied 201 participants with cancer who were matched with 201 controls who were cancer free. The researchers looked at the trend of LDL-cholesterol for an extended period of time prior to cancer diagnosis, using data taken at four points over an average of 18.7 years prior to diagnosis. They found that LDL-cholesterol levels were lower in the participants with cancer than their matched controls at each of the data points.

As compared to the cancer-free subjects, the trend of low LDL-cholesterol in those who developed cancer was consistent throughout the period of the study. (Medicalnewstoday.com 3.27.2012)

This is another, in an ever-growing number of studies showing an association between low cholesterol (including LDL-cholesterol) and cancer development. The AMA and most cardiologists have been beating the drum claiming that we need to lower cholesterol levels down to numbers only obtainable through the use of medications such as statin drugs.

Cholesterol-lowering medications are overused. There is no known benefit of these medications in the elderly as lowered cholesterol levels predict a shorter lifespan in this population. If you have not had a stroke or a heart attack, there is no known benefit of a statin drug. Women have never been shown to benefit from taking a statin drug. The only benefit that statins have been shown to provide is for patients who have already suffered a cardiac event—patients who have previously had a heart attack or a stroke. In this case, the research shows a slight reduction in non-fatal heart attacks (approximately 1%) after three years of use.

More information about statins can be found in my book, Drugs That Don’t Work and Natural Therapies That Do. Educate yourself about how these drugs work. When you do, you will see that the use of statin drugs does not make biochemical sense. Furthermore, the research behind statin drugs does not make common sense. If you have high cholesterol levels, search for the underlying cause and treat it. That is a common sense approach to a medical problem. 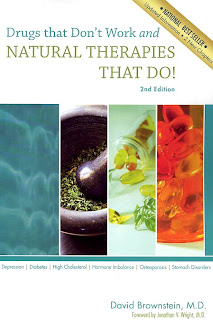