The article from Reuters is titled, “Merck was ordered to pay $321 million in Vioxx probe,” (Reuters 4.26.10).  The article states, “A Boston federal judge sentenced Merck & Co. to pay a $321 million criminal fine for improperly marketing its Vioxx painkiller a decade ago.”

Big Pharma pleaded guilty to having illegally promoting Vioxx for the treatment of rheumatoid arthritis before it was approved for that use in 2002.  Vioxx was withdrawn from the market in 2004 after it was found to cause heart attacks, strokes and death.  Furthermore, Merck agreed to pay more than $600 million to the federal government, 43 states and the District of Columbia for a wider range of improprieties.

So, let me get this straight.  Big Pharma Cartel member Merck & Co. just paid out $1 billion dollars for criminal activity.  Do you think that is a lot of money?  Merck doesn’t.  Vioxx generated nearly $2.5 billion dollars in sales per year during the time it was on the market.  Perhaps a billion dollar fine is considered ‘just part of doing business.’  But, ‘just doing business’ should not include tens of thousands of patients dying needlessly.


What were the consequences of Merck’s illegal activity?  The FDA estimates that between 1999 and 2003, Vioxx may have contributed to more than 27,785 deaths. (MSNBC.com 10.6.2004). Other estimates place the number of deaths from Vioxx at 55,000. Furthermore, it is thought that over 100,000 patients suffered a stroke or heart attack after taking Vioxx.

Let’s think about this. This was an FDA-approved drug that caused nearly 20x more deaths than al-Qaeda did on 9.11.11.  The only doctors cautioning against the use of Vioxx and other Cox-2 inhibitors were the holistic doctors who actually studied the Cox-2 inhibitors mechanism of action.  The doctors that actually understood how Cox-2 inhibitors worked were predicting that the use of Cox-2 inhibiting drugs (e.g., Vioxx and Celebrex) would cause an increase in blood clots, strokes and heart attacks.  So why couldn’t the FDA look at this information?  Why did it take the FDA so long to remove Vioxx from the marketplace?

What can you do?  Number one, adopt a holistic lifestyle of eating a healthy diet, drinking water and exercising in order to achieve your optimal health and minimize your risk of having to be prescribed an FDA-approved medication.  However, if you have to take a prescription medication, it is wise to research how the drug works and the potential adverse effects.  Remember, you are ultimately in charge if your health care decisions.  You can say “yes” or “no” to a drug therapy.

My book, Drugs that Don’t Work and Natural Therapies that Do provides the information you will need to decide if you should take a prescription medication.  This book provides information about commonly prescribed drugs such as medications to treat diabetes, high cholesterol, depression, stomach problems, hormone imbalances, and osteoporosis.  Furthermore, I have a whole chapter devoted to the problems with Cox-2 inhibitors like Vioxx and Celebrex.

There is very little need for Cox-2 inhibitors.  Adopting a healthy lifestyle will naturally decrease inflammation and minimize your need for any anti-inflammatory medications. 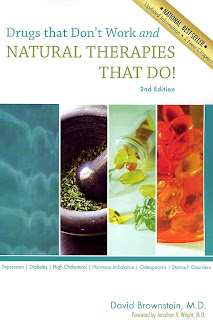