However, it is not just cancer that is a consequence of iodine deficiency.  If a pregnant woman is deficient in iodine, the fetus will also suffer complications.  An article in Nutrients (2011;3:265-273) describes the fetal consequences of iodine deficiency.  During the first trimester, the fetus is dependent on the thyroid hormone produced by the mother.  If the mother is deficient in thyroid hormone, the fetus’ thyroid will not develop normally and the fetus may be subjected to neurological problems.


According to the article, in order for a pregnant woman to produce enough thyroid hormone to meet both her own and the baby’s requirements, a 50% increase in iodine intake is recommended.  Adequate iodine levels are needed to produce thyroid hormone.   Iodine deficiency in the mother results in damage to the fetal brain which is aggravated by fetal hypothyroidism.

I have been writing and lecturing about thyroid problems and iodine deficiency for nearly 20 years.  Unfortunately, over this time period, iodine deficiency is still occurring at epidemic rates.  I have no doubt that if we do not correct this decline, the increasing burden of illness will lower our standard of living.

Iodine deficiency should be a national health concern addressed by the highest levels of the government.  Since it takes 100 years (my estimate) for the government to react, I say that you should not wait;  take matters into your own hands.  Educate yourself about iodine and have your levels checked.  If you are low in iodine, I suggest supplementing with iodine.  More importantly, it is vitally important for women of child-bearing age to have their iodine levels assessed before they become pregnant.

More information about iodine and how to be tested for it can be found in my book, Iodine: Why You Need It, Why You Can’t Live Without It.  This book can be ordered at:  https://www.drbrownstein.com/bookstore_Iodine.php 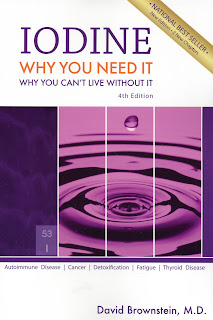